The Problem Isn’t Your Lack of Focus, It’s What You Are Choosing to Focus On?

What is Attentional Focus?

As coaches we usually provide some type of instruction to our athletes in order to enhance their performance and learning of a motor skill, for example “when you kick the ball follow through with your foot” or alternatively “when kicking a free aim for the black spot” (Wulf, Hob & Prinz 1998). What we instruct the athlete to focus on and what the athlete concentrates on during the execution of a complex skill such as kicking, fisting a ball or striking a sliothar is known as attentional focus (Wulf, 2007, 2013). The type of focus the athlete adopts during the execution of the skill actually has a very important role to play in both the speed and retention of learning (Wulf, Shea & Lewthwaite, 2010) and it is essential for coaches to understand the potential impact of their instructions on the learning process as it has been shown that simple changes in wording instructions / cues, has a significant impact on both performance and learning (Wulf, Shea & Lewthwaite, 2010).

There are typically three types of attentional focus reported in the literature, these being external, internal or neutral (no instruction) focus of attentional (Wulf, 2007, 2013). External focus directs the performers’ attention away from the body and towards the movement effect i.e. “kick the ball over the bar” (Wulf, Shea & Lewthwaite, 2010). Internal focus directs the performers’ focus towards their body i.e. “grip the ball tightly in your hands” (Bell & Hardy, 2009).

So which is more effective external, internal or no instruction?

In a seminal piece of research Wulf, Hob & Prinz, (1998) carried out two experiments both of which reported that the external focus of attention group was significantly (p<0.05) more effective than both internal and neutral groups (neutral group only used in experiment one) during a retention test among novices as seen in figure 1. It should be noted however, that both the control group and internal group significantly improved as well, though not to the same level as the external group. Another interesting finding in experiment one was that the neutral group actually outperformed the internal instruction group. In experiment two the internal group performed better during practice than the external group, though the use of external cueing was more effective on the retention test a day later, which is the ultimate goal of the coaching process we embark on. In conclusion this paper provided the basis that external focus of attention as a more effective coaching strategy for complex motor skill learning. 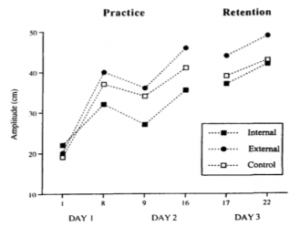 There are however, studies that have reported internal focus of attention as a more effective strategy for novice learners though these studies would seem to have certain methodological issues once critically reviewed (Wulf, 2013).  Perkins-Cecatto, Passmore & Lee, (2003) is one such study which reported an internal focus of attention would be a more effective cueing strategy to adopt for novice golf learners.  The results did indeed report the low skilled group significantly performed better with an internal focus on shot variability, figure 2. A number of methodological issues with this study, have however been raised with peer review, which include 1. The lack of a retention test, which is particularly important as we have already seen that internal focus can outperform external during practice (Wulf, Hob & Prinz, 1998) 2. Significance was only seen on shot variability and not shot accuracy which is the goal of sports performance, 3. The internal instruction made no reference to one’s body and actually could possible considered as an external cue i.e. “concentrate on the form of the golf swing and to adjust the force of their swing depending on the distance of the shot” 4. Confounding instructions confusing the performers what actually to focus on i.e. “form of the golf swing” or “force of their swing” or “distance of the shot” (Wulf, 2007, 2013). 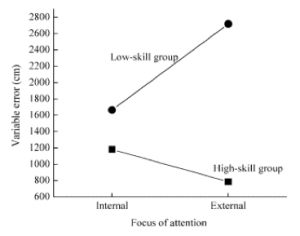 When reviewing systematic review papers on attentional focus it would seem that there is overwhelming evidence supporting external focus of attention as a more effective cueing strategy across 1. A range of tasks from golf putting to football kicking 2. Skill levels from novice through to advanced and 3. Populations including young, old and people with Parkinson disease (Park, Yi, Shin & Ryu, 2015; Wulf, 2007, 2013; Wulf, Landers, Lewthwaite, & Tollner, 2009). 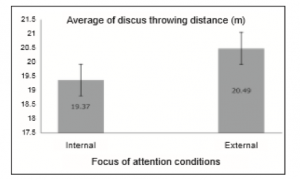 Figure 3. Average discus throw distances on both internal and external instructional groups, who had a mean age of 22 and included both beginner and intermediate level populations. Results table reported in “External focus of attention enhances discus throwing performance,” by M. Zarghami, E. Saemi, and I. Fathi, 2012, Kinesiology 44(1), 74-51.

Why is external focus of attention more effective?

So what does this mean for coaches?

Anecdotally, it is common for a GAA management team to get frustrated and blame athletes for not transferring a good Friday night practice session to match play on a Sunday. Perhaps the issue is not the athlete or the content of the training on a Friday night, but maybe coaches using less optimal internal instructional learning strategies which have been shown not to be as effective on retention tests within the literature (Wulf, 2007, 2013). As evidenced based practitioners there is overwhelming support for the use of external cuing as a more effective coaching method in the learning process. It would seem only logical to adopt an external focus instructional strategy to enhance the learning process of our athletes. It thus may be of benefit within our coaching practices to think about developing an external instructional framework or directory such as that proposed by Winkleman (2017).

When working with the coaching and management team to develop a range of external instructions it could also be beneficial to consider the manipulation of the 3D’s which are distance, direction and description in the construction of optimal external cues, figure 5. For example “run to the cone” vrs “explode towards the cone as if you’re chasing an opponent” (Winkleman, 2017). Both are external instructions however the later clearly manipulates the 3D’s which could provide for more effective learning (Winkleman, 2017). 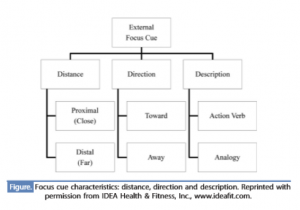 Figure 5. The 3D’s to consider when constructing an external instructional framework. Reported in “Attentional focus and cueing for speed development,” by N. Winkleman, 2017, Strength and Conditioning Journal, 1-13,

In summary, attentional focus is a key factor in enhancing motor learning and performance (Wulf, 2007). External focus is considered more effective (retention) than both a neutral or internal focus of attention (Wulf, Hob & Prinz, 1998) and could possibly provide a solution to prevent athletes choking under pressure or athletes who have high anxiety levels (Wulf 2007; Bell & Hardy, 2009). Internal focus still improves performance and learning however, can be considered as a less optimal strategy (Chiviacowsky, Wulf & Wally, 2010), however, it could possibly be beneficial when consciously dismantling a skill to modify technical ﬂaws (Bell & Hardy, 2009). An understanding of the constrained action hypothesis can help to explain why external instructions are shown to be more effective than an internal focus, in that external focus promotes unconscious/automatic processes, whereas Internal focus inhibits these automatic processes (Wulf, 2007,2013). At a practical level we should use the overwhelming scientific evidence to adopt an external instructional coaching strategy when communicating with our athletes and the development of an external instructional framework or directory, manipulating the 3D’s of direction, distance and description, such as that proposed by Winkleman (2017), which could be of real practical benefit to your coaching practice and effective learning of complex motor skills of your athletes.