The primary aim for coaches with respect to conditioning Gaelic football teams should ultimately be to ensure our teams are able to cope with the physiological, mechanical and movement demands of the game. Anecdotally, there would seem to be polarized coaching philosophies when it comes to the methods used to condition the modern day Gaelic football team. The use of small sided games on one side ( skills coach) and some form of interval training on the other side (conditioning coach).

So what does the research tell us?

Gaelic football is a high intensity intermittent team sport ball game. It is played between two teams of fifteen players whose aim is to outscore the opposition during two thirty (sub-elite) or thirty-five (elite) minute halves of football (Collins, Doran & Reilly, 2013; Reilly & Doran, 2001).

An improved VO2max would therefore seem an important physical quality for strength and conditioning (S&C) coaches to develop within Gaelic footballers.

HIE bouts of anaerobic activities have been shown in other team sports to be critical to the outcome of the game (Rampinini et al., 2009; Swaby, Jones, & Comfort, 2006) and are also reported as the main contributing mechanisms to non-contact injuries in Gaelic football (Murphy et al., 2012).

It would therefore seem logical for Gaelic football S&C coaches to also attempt to positively influence both high intensity running performance activities and injury resilience via effective conditioning protocols aimed at increasing anaerobic and neuromuscular qualities in addition to VO2max. 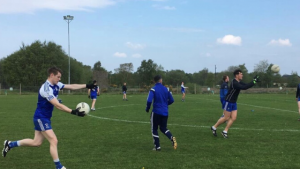 Research from Collins et al. (2013) presented data that small sided games can be an effective physiological training stimulus for sub-elite GAA teams improving repeat sprint ability, endurance and 5 metre sprint times. In this study they used a protocol of 4 v 4,  6 sets of 4 minute games, performed at >90% HRmax, with a 3 minute passive recovery, on a 80m x 20x pitch size.

Hill-Haas, Dawson, Impellizzeri, and Coutts (2011) in a systematic review of small sided games in soccer also concluded that small sided games had the potential of delivering similar performance and physiological gains as traditional interval training protocols.

Now before skills coaches stand up and shout “I told you so”, potential limitations do however exist with an over reliance on SSG. Individual physiological and running performance responses within SSG have been reported as highly variable (Buchheit & Laursen, 2013). In addition, variables including, the number of players used, relative pitch size dimensions, coach encouragement, game times (both intermittent and continuous), work rest ratios, artificial rules changes and relevant fitness levels of the players included in the games would seem to have an effect on the physiological demands during the small sided game with some variables having a greater effect than others (Rampinini et al., 2007; Hill-Haas et al., 2011; Collins et al., 2013).

Therefore, a coaching philosophy solely relying on small sided games may not provide the progressive overload required to consistently enhance performance, which may actually lead to a plateau or decrement in performance. Most sub-elite clubs do not have access to GPS technology and thus training load, high intensity running and sprint volumes may not be monitored accurately to ensure an adequate stimulus or overloading strategy is being applied, although methods such as RPE and HR monitoring could help to bridge the gap.

It is thus imperative that skills coaches working at the upper levels of sub-elite and elite Gaelic football need to start thinking scientifically about how they approach their overloading strategy of small sided games. They must also understand the effects of manipulating each of the mentioned variables have on the physiological demands within the small sided game, in order to ensure at the most fundamental level that heart rate zones reach 90% – 95% levels, which have been reported as being similar to those found in effective interval training protocols (Rampinini et al., 2007). Qualified strength and conditioning coaches should be well versed in the physiological adapatations of various small sided games set-ups and should be seen as a close ally rather than a threat to small sided games.

“It would be my opinion that those elite managers and skills coaches consistently working with teams performing at a high level are working very closely with their strength and conditioning coaches in the development of very specific constraints based small sided games to effectively transfer training games into match day performance”.

Hence, why at Setanta Fitness we only work with management teams who see Strength and Conditioning as more than a gym based preseason tick box. 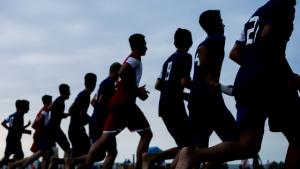 On the other side of the continuum, research on interval training approaches have been about for quite some time. According to Baker (2011), historically aerobic conditioning for team sports would have involved long steady state training, however it would now seem that this strategy is less effective for elite athletes. Time spent above 100% maximal aerobic speed, targeting the training volumes published in the GAA match running demands research, is now considered more effective at building aerobic power closely related to the demands of the sport.

This process can also be potentially more time efficient, which could be considered the holy-grail for the modern day strength and conditioning coach. Collins, Hughes, Keenan & Kennedy (2013) presented research confirming that high intensity interval training improved a team’s performance in the YOYO IR2 shuttle run test in comparison to the control team using a non-modified preseason conditioning method.

All these protocols are relatively easy to monitor and progressively overload in line with the volumes and intensities reported in the published research, which is why most strength and conditioning coaches feel its safe territory to adopt some form of interval training protocol.

Again before strength and conditioning coaches start to shout about believing that they can guarantee improved physical performance through this relatively controlled progressive modality, it is important to consider the limitation of this approach.

Unlike small sided games they exclude the concurrent development of ball skills, decision making and match movement strategies (Rampinini et al., 2007) which are skills desirable in a team sport context and ultimately we are training footballers, not sprinters or middle distance runners. 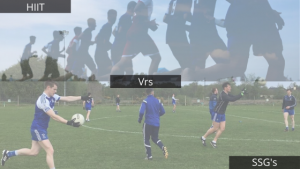 Therefore this ratio of SSG’s vrs Interval training is often fluid during preseason, in season as well as season to season as the team develops. Finally my conditioning approach is also designed and programmed in partnership with the management, coaching, performance analysis and medical teams. There is no i in Team!

If you require help with developing a conditioning plan for your Gaelic football team please feel free to contact me via the contact form below and to keep up to date with more training tips and learning why not connect with me via any of the below social media channels.

Collins, D. K., Solan, B., & Doran, D. A. (2013). A preliminary investigation into high-intensity activity during elite Gaelic football match play. In Symposium Conducted at the Meeting of the British Association of Sports and Exercise Science Strength, Conditioning and Sports Therapy Research Symposium.

0
Ice Baths Could Be Freezing Your Long Term Athletic Development?Uncategorized